“A smile in snowy white and strength in a starched skirt” 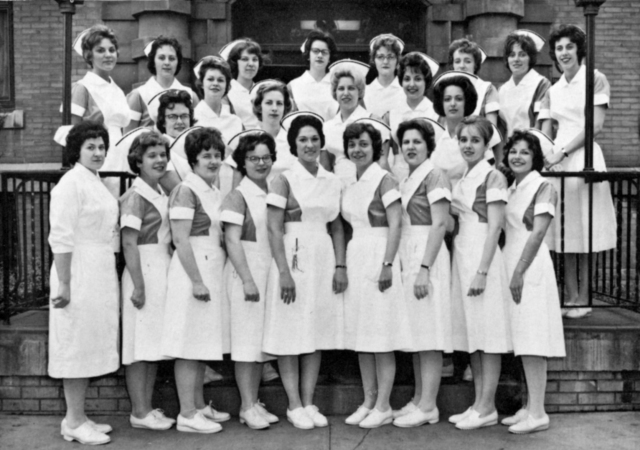 Class of 1963, School of Nursing, General Hospital of Syracuse. (This school was on the corner of East Castle and South State streets in  Syracuse. It moved to Community-General Hospital in 1964. Today, Central Park Rehabilitation and Nursing Center is located on East Castle St., which has been renamed Martin Luther King East.)

Retired nurse Jean (Farmer) Pirozzi was happy to share 50th anniversary memorabilia with Upstate, including her 1963 nursing-school yearbook which has a seven-stanza poem describing the student nurse as, “A smile in snowy white, strength in a starched skirt…a modern Florence Nightingale.”

Pirozzi chuckled when she acknowledged how clearly her yearbook reflected very different times — and attitudes —  in hospitals:

“Doctors yell at them, interns tolerate them and patients love them,” continued the yearbook poem. “A student nurse likes…pretty clothes…and Mom and Dad…She is a wonderful creature…your living symbol of faith and sympathetic care.”

In the 1960s, Pirozzi explained, slim velvet bands on white caps were significant to anyone in healthcare: Ribbons on the sides identified a junior in nursing school; a full band meant the wearer had an RN degree.

Pirozzi earned her RN degree at the General Hospital of Syracuse in 1963. A year later, that hospital merged with the new Community Hospital, which became Community-General Hospital. The nursing school moved to the Community campus, and the last class graduated in 1968.

In 1965, Pirozzi began working at Upstate’s downtown hospital. At the time, intensive care units were new, and she chose to work in that specialized area for close to 15 years.

At the same time, SUNY Upstate Medical Center (as it was known in the 1960s) offered  associate’s degree programs for nurses. Today, Upstate’s College of Nursing offers bachelor and master of science degrees, post-masters certification, and doctorates of nursing practice. (In May 2014, the university awarded 154 nursing degrees and four post-masters certificates.)

Today, Pirozzi is president of her Nursing Alumni Association. She meets with her former classmates a couple of times a year.

What does she think about Upstate today?

“The children’s hospital, the new cancer center, the cord blood center,”  smiled Pirozzi, “are all very much needed.”

Thank you to Kristin Bruce of Upstate’s Volunteer Services for connecting Jean Farmer Pirozzi with the hospital anniversary committee.

Occasional contributor Upstate’s Susan Keeter has written about and painted Upstate’s Dr. Sarah Loguen, one of the first African American women physicians. Keeter created the horse sculpture in front of the Upstate Golisano Children’s Hospital and illustrated a children’s book on autism, “Waiting for Benjamin.” She’s written for Physician Practice, Upstate Alumni Journal, Cancer Care and Upstate Health magazines. Reach her by email at keeters@upstate.edu or by phone at 315-464-4834.
View all posts by susankeeter →
This entry was posted in alumni, community, education, entertainment, health care, history, nursing, Upstate Golisano Children's Hospital/pediatrics, volunteers. Bookmark the permalink.
%d bloggers like this: