What cancer taught one mom: Keep things as normal as possible 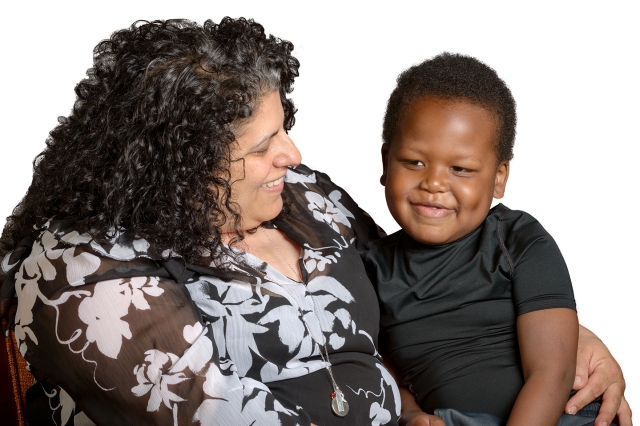 Levi Haddad, 4, with his mother, Laurin Haddad. Adopted when he was 1 day old, Levi was diagnosed with leukemia on his fourth birthday. (photo by Robert Mescavage)

Levi Haddad was about to turn 4 when he went with his mother to her doctor’s appointment in November 2017. The youngster was tugging on his ears. The doctor felt a line of bumps where Levi’s neck met his shoulders, prescribed antibiotics and scheduled a follow-up appointment in two weeks.

Laurin Haddad remembers that her son had been increasingly tired and congested, symptoms that mimicked allergies. Four days after the doctor’s appointment, Levi was so exhausted that he lay on the floor during his birthday party. At night, his snores turned into gasps for breath. The next morning, Haddad called the doctor to ask for blood tests and took Levi to an urgent care center.

After the blood work was done, mother and son tried to enjoy a pancake breakfast at The Gem Diner on Spencer Street in Syracuse. Before noon, their family doctor called with the results from the laboratory. She told them to immediately go to the emergency department at Upstate.

Levi was admitted to the Upstate Golisano Children’s Hospital. The next morning, he received his first treatment for T-cell acute lymphoblastic leukemia, under the care of pediatric hematologist/oncologist Philip Monteleone, MD, in Upstate’s Waters Center for Children’s Cancer and Blood Disorders.

For the first six months of treatment, Levi and his mother alternated between hospital stays and time at home, in relative isolation. Haddad wanted to protect her son from exposure to infections while his immune system was depressed by chemotherapy. She kept family and friends updated through a free website called CaringBridge.org.

Levi received a variety of cancer medications, in liquid and pill form, and through intravenous lines. He submitted to lumbar punctures — needle sticks in his lower back — and had to take steroids.

But many times Levi is still her kind-hearted son with the sweet smile. Haddad remembers one visit at the Upstate Cancer Center. Levi saw a little girl crying because she had to get a lumbar puncture. “It’ll be OK,” Levi told her as he put his arm around her. “It’s not that bad.”

In April 2018, with Monteleone’s approval, Levi returned to pre-kindergarten at the Jewish Community Center in Syracuse. His mother went back to her law practice, part time, and worked around Levi’s weekly chemotherapy treatments and hospitalizations. In August, the JCC hosted a blood drive and a bone marrow donor drive in Levi’s honor. At that time, his treatments followed a 10-day cycle: chemotherapy and an appointment at the Upstate Cancer Center, then home for 10 days.

Now, Levi is receiving maintenance chemotherapy. He has monthly intravenous treatments at Upstate and takes steroids for a week each month. Twice in three months, he has a lumbar puncture to inject chemotherapy into his spinal fluid. He takes a pill once a day, plus an additional pill once a week.  This treatment is scheduled to continue until April 2020.

Throughout it all, Levi has been busy at his pre-kindergarten class, working to make up for the six months of school he missed.

Haddad says she has learned a lot in the year since her son’s diagnosis.  “When your child has cancer, you see his life as more precious.

“You are terrified,” she admits. “But you can’t interfere with your child’s happiness. So you paint a smile on your face and figure out how to get your lives back to normal as much as possible.”

What is T-cell acute lymphoblastic leukemia?

Acute lymphoblastic leukemia (ALL) is the most common childhood malignancy, found in approximately one-third of all newly diagnosed pediatric cancer patients.

ALL is a blood cancer in which too many lymphoblasts (immature white blood cells) are found in the bone marrow and blood. The T-cell type is fast-growing and found in 10 to 25 percent of pediatric ALL cases. Children with T-cell ALL typically receive more and higher doses of anticancer drugs than children with the more common early B-cell subtype.

Symptoms of ALL include fever; easy bruising or bleeding; loss of appetite; pale pallor; tiredness and weakness; bone or joint pain; pain or feeling of fullness below the ribs; painless lumps in the neck, underarms, stomach or groin; and petechiae, which are flat, pinpoint, dark red spots beneath the skin caused by bleeding.

Sources: National Cancer Institute and Atlas of Genetics and Cytogenetics in Oncology and Haemotology

This article appears in the winter 2019 issue of Cancer Care magazine.

Occasional contributor Upstate’s Susan Keeter has written about and painted Upstate’s Dr. Sarah Loguen, one of the first African American women physicians. Keeter created the horse sculpture in front of the Upstate Golisano Children’s Hospital and illustrated a children’s book on autism, “Waiting for Benjamin.” She’s written for Physician Practice, Upstate Alumni Journal, Cancer Care and Upstate Health magazines. Reach her by email at keeters@upstate.edu or by phone at 315-464-4834.
View all posts by susankeeter →
This entry was posted in cancer, chemotherapy, health care, Upstate Golisano Children's Hospital/pediatrics and tagged acute lymphoblastic leukemia (ALL), childhood cancer, pediatric cancer, T-cell acute lymphoblastic leukemia (ALL). Bookmark the permalink.
%d bloggers like this: